Costa Rica: ‘the most biologically intense place on Earth

Riding high… The tour group on a trail above Drake Bay. All photographs by Johnny Langenheim for the Guardian – except where stated

Costa Rica is famous for its national parks, but has only recently turned attention to supporting the people who live in them. Johnny Langenheim joins a community-led tour of its jungly Osa peninsula

I it’s dusk and Don Felix is sitting on the porch of his cabin, sipping a can of Imperial beer. Two white horses graze in a meadow and beyond them, evening mist spills over a ridge thick with jungle. Fireflies flicker in the gathering darkness. I let out a long breath and feel tightness release in my belly. Henry David Thoreau had it right when he said: “We need the tonic of wildness.”

And what wildness. Costa Rica’s Osa peninsula, a former island that now makes up the southernmost reach of the country’s Pacific coast, was called “the most biologically intense place on Earth” by National Geographic. It crams 2.5% of the planet’s biodiversity into just 0.001% of its surface area. And, this being Costa Rica, 80% of it is protected, mostly by the Corcovado national park.

“We’re good at conserving nature here,” says Daniel Villafranca of the recently launched Caminos de Osa community tourism initiative. Our group of 10 explorers is sitting down to a feast of gallo pinto (rice and black beans), tangy fried pork, salsa and fried plantain prepared by Don Felix’s wife, Doña Yentsy. “A quarter of our country is national park. But we need new approaches that support people, too. That’s what Caminos de Osa is trying to do.”

Dom Felix used to hunt for gold and pigs before welcoming tourists.

Don Felix is a case in point. He used to prospect for gold and hunt wild pigs in remote parts of Osa, both illegal activities that damage this area’s fragile ecosystem. Now he and his wife have joined a network of local entrepreneurs hosting groups like ours on immersive tours. Daniel helps pull all the various stakeholders together and market the four- to six-day itineraries – as well as tailored trips that combine trekking, kayaking, horse riding, diving and snorkelling with visits to indigenous communities.

We’re a day into our four-day tour – a variation on the group’s Camino del Agua (Water Trail). There’s a core of Costa Ricans plus myself and a couple of Canadian conservation biologists. Already we’ve chugged down the Sierpe river via mangrove lagoons into the peninsula proper, spotting crocodiles, toucans, ringed kingfishers and Jesus Christ lizards (they walk on water), and trekked to a waterfall for an invigorating dip. By 9pm, full of beans and beer, we retire to our bedrooms in an extension Don Felix has recently added to his home to accommodate guests.

At mid-morning the next day, my horse, Negro, trots up a steep section of track and through a break in the trees: beyond the mouth of the Agujitas river, I see the Pacific Ocean for the first time. Once your buttocks adjust, horseback is definitely the way to travel this landscape. Negro clops steadily along, allowing me to take in at my leisure enormous hardwoods with buttressed roots, scarlet macaws (Osa has the largest population in Central America) and even a troop of howler monkeys, whose guttural bellows belie their diminutive size.

These trails were originally blazed by hunters and gold prospectors. Today the more challenging Camino del Oro (Gold Trail) takes visitors on treks deep into Osa’s rainforest interior. But we’re taking the less strenuous coastal route and our next stop is Drake Bay, named after England’s most famous privateer, who is said to have left a trove of treasure here in the 16th century.

A green kingfisher on the Sierpe river Photograph: Stephen Ban

After our four-hour ride, lunch at Don Alberto’s restaurant is a welcome interval. Afterwards, he takes us for a walk around his “garden”, which is a biodiversity hot spot in its own right. He shows us a camphor tree that emits a flammable sap like eucalyptus, wild coriander and garlic, and a tree that smells like a corpse. When I brush past an acacia bush, symbiotic ants swarm out of seedpod hiding places and attack me with kamikaze fervour. Alberto has an encyclopaedic knowledge of all the plants.

Costa Rica developed its national parks system in the 1970s, taking its cue from the great North American parks. It has been hailed as an outstanding conservation success, but community ecotourism initiatives are still brand new. “The reality is the people who live in the parks need to earn a livelihood, but regulations make that very difficult,” says Villafranca. “This approach turns poachers and gold prospectors into natural custodians, who are directing the tourism narrative.”

After lunch, we head down to the beach. Osa’s coastline is wild – even around the resort enclave of Drake Bay the beaches feel primordial, fringed by jungle on one side and thrashed by Pacific rollers on the other. Crocs and bull sharks populate these waters and rip currents abound, so going for a dip can be dicey. But scuba diving is on the agenda the next morning, and sharks are exactly what we will be looking for.

A wild beach near Drake Bay

We find them 10 miles offshore in the Caño Island biological reserve. As I dive to the bottom, 20 metres deep, a green turtle cruises past, while a couple of white-tip reef sharks lie in the sand a few metres away, unperturbed by our presence. Our guide, Quique, taps on his tank and points out a big stingray resting on a rock “cleaning station”, where tiny fish nibble parasites from its skin.

That night we camp on remote San Pedrillo beach, the jungle looming above us. The rangers have cordoned off a section of sand for a turkey vulture whose nest has fallen out of a tree. She ambles over to her eggs and settles down on it as the sun dips spectacularly over the Pacific and I try out a little sunset body surfing. Next morning we wake to find a gaggle of campers and rangers on the beach, staring out at the breaking waves. Turns out a croc that hangs out in the nearby river mouth had decided to do a spot of bodysurfing herself – she’s clearly visible, rolling around in the same breakers I’d surfed the night before, with a snaggle-toothed grin that makes me feel a bit queasy.

Our last day takes us on our first a real trek through the jungle and it is magical. It is relatively cool in the dappled sunlight beneath the canopy. There are jaguar and tapir in these parts and our guide Neyer points out signs of both – deep prints in the mud and a musky, livestock smell on the breeze that suggest a tapir is close. 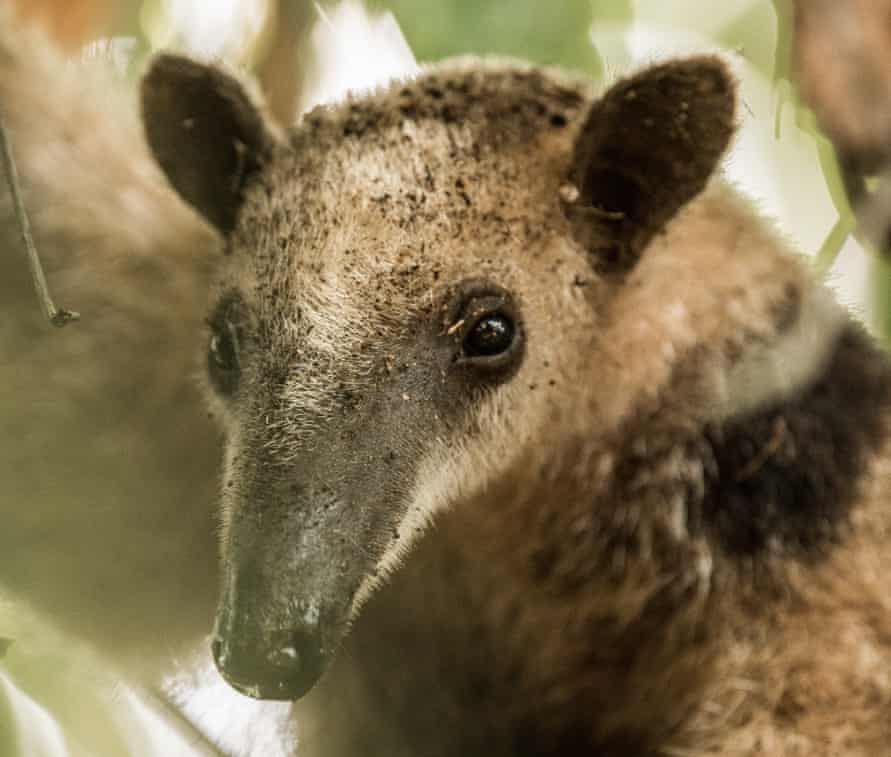 Like all the guides, Neyer has a spotting scope that brings abundant wildlife into sharp relief. Besides myriad bird species, we glimpse spider monkeys high in the canopy – all limbs and prehensile tail – and spot a juvenile anteater clinging to a branch with dirt all over its snout, presumably from a recent forage for ants. “You’re lucky,” says Neyer. “It’s very rare to see them in the wild like this.”

Though we’ve hugged the coast and barely skimmed the edges of the national park, the whole four-day trip has felt like an immersion (though harder, tailored treks deep into the jungle are also possible). As we reach our final stop, family run Bella Vista lodge, on a ridge above Drake Bay, I gaze out at the Pacific, with an icy beer in hand and thoroughly content. This journey has been tonic enough.

The trip was provided by Caminos de Osa (caminosdeosa.com), whose tours cost from $450pp. Guests need a tent for some itineraries and appropriate gear for jungle trekking